A Decade of July 4th Debt Explosions: Are They Getting Less Spectacular?

The CBO just released its 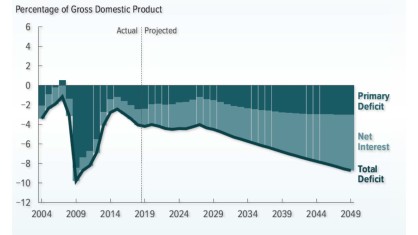 2019 Long-Term Budget Otutlook  on June 25, and so it’s time for a July 4th update. The chart of the total deficit on the front cover of the report (reproduced here) is a sight to behold.  As CBO says: “If current laws generally remained unchanged, large budget deficits would boost federal debt to unprecedented levels over the next 30 years.” 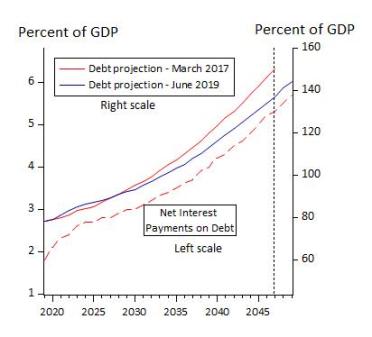 The message, like the fireworks display, is still loud and clear: The debt is exploding, and net interest payments are rising rapidly as a share of GDP. No new news here.

But there are two pieces of news in the debt chart. First, the debt is now projected to be 11 percentage points lower as a share of GDP in 2047 compared to the projection at this time last year. That’s an improvement. Second, the 2017 Tax Act did not increase the debt to GDP ratio going forward: The projected trajectory of the debt to GDP ratio is lower after the tax cut than before, except for a small increase at the start of the projection.  The debt problem is still due to rising spending growth not the tax reform. Maybe less spectacular, but no reason for complacency.

This entry was posted in Budget & Debt, Fiscal Policy and Reforms. Bookmark the permalink.