Listen to the Economic Experts

Each year I look forward to reading the Annual Report of the President’s Council of Economic Advisers which endeavors to explain the economy and policy from the perspective of the current Administration; my interest may have been piqued from working on Reports in the ’70s and ’90s.

There are similar reports from other governments, of course, including the Annual Economic Report of the German Council of Economic Experts (GCEE), which this year is particularly good with chapter one and some other chapters available in English. Unlike in the US, the Council in an independent economic-policy advisory body–now consisting of Christoph Schmidt, Peter Bofinger, Lars Feld, Isabel Schnabel and Volker Wieland–which submitted the Report to Angela Merkel last month.  This year’s Report has excellent  policy analysis on topics ranging from regulatory policy to bailout policy to monetary policy.

This year they examined the controversy over secular stagnation and the equilibrium real interest rate.  They concluded that evidence “contradicts the hypothesis that there is a ‘secular stagnation’ across the euro area, which would be accompanied by negative long-term equilibrium interest rates. Instead, there are indications that structural reforms, which strengthen markets and competitiveness…” are the way to exit from the crisis and restore growth.

I particularly liked two very interesting and informative charts relating to the US in the macro chapter of the Report.  In one they examine an idea discussed by Janet Yellen in a widely-cited speech from March of this year. Janet Yellen shows that if you insert estimates of the equilibrium interest rate computed by Thomas Laubach and John Williams (LW) into a Taylor rule, you get a lower policy interest rate in the US than if you assume a 2 percent real rate as in the original version of the rule. However, as the Report of the Council of Economic Experts shows, that’s not true if you also insert, along with the LW equilibrium interest rate, the LW output gap as logic and consistency would suggest. The chart below from the Report (with boxes in English by me) shows this.

Another chart in the macro chapter of the Report provides estimates of the equilibrium real interest rate from the famous Smets-Wouters model estimated using rolling 20-year windows of real time data.  It shows that the equilibrium real interest rate in the US is now a bit more than 2 percent (not zero percent as some, including Laubach and Williams, have argued) and has changed by a relatively small amount over the years—from around 3 percent in the early 1990s. 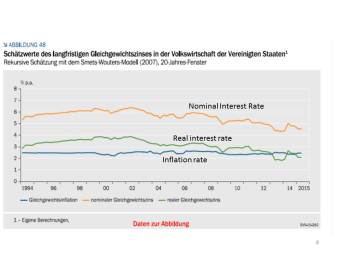 Overall the Report warns that there is high degree of uncertainty in estimating and using time-varying estimates of the equilibrium real interest rate in monetary policy analysis, whether using rules or discretion.