Today I published a column in Project Syndicate on fiscal policy. I am positive about pro-growth effects of the tax reform in the 2017 tax act and of the greater use of cost-benefit analysis in the recent regulatory reform effort. And the recent trade deals—the USMCA and “phase one” with China—take away some threats of trade wars.

But there is still a fiscal policy problem due to the growing federal budget deficit and debt. Fortunately, this problem can be addressed in way that promotes economic growth. Showing how this can be done with structural budget reform is the purpose of the column.

One issue, however, is taking steam out of such a structural reform effort. It is a new focus on reform of the automatic stabilizer part of the budget. But these automatic stabilizers do not need to be reformed. The following table shows why. It updates the approach of my paper, Reassessing Discretionary Fiscal Policy, published 20 years ago in the Journal of Economic Perspectives.  The table gives the estimated response of structural, cyclical and total deficit to real GDP relative to potential GDP. 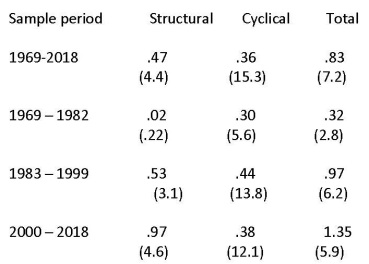 Observe that the percentage impact of the deficit on the cyclical component is about the same amount (.38) from 2000 to 2018 as the amount (.36) from 1969 to 2018, as was mentioned in the article. So reform should focus instead on the growing structural deficit.