The Room Where It Happens

I enjoy the nexus between the world of ideas and the world of action, probably because I have gone back and forth between those two worlds several times as described here. There is nothing more rewarding then developing ideas and then having the opportunity to bring them into action. The song “The Room Where It Happens” in the musical Hamilton is a wonderful rendition of this nexus where Alexander Hamilton gets his debt ideas into action.

When asked by the Wall Street Journal and Bloomberg News about by favorite books for 2016, I chose books that fell into this nexus.  For the Wall Street Journal list, I chose The Man Who Knew, Sebastian Mallaby’s excellent biography of Alan Greenspan, and War by Other Means by Robert Blackwill and Jennifer Harris. Here are the reasons that I gave and that the Journal published:

For Bloomberg News I chose The Euro and the Battle of Ideas by Markus Brunnermeier, Harold James and Jean-Pierre Landau (I also wrote a longer review here) and The Curse of Cash by Ken Rogoff.  Again here are the reasons as published by Bloomberg News: 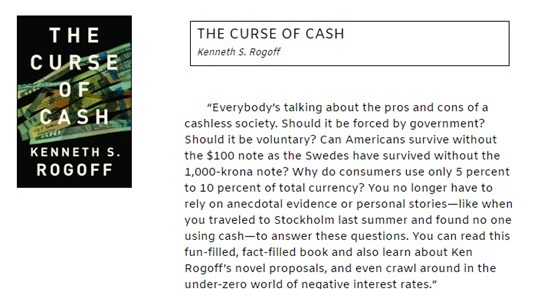