The Fed’s Normalization: How Long and How Far?

The Monetary Policy Subcommittee of the House held a hearing yesterday on “Interest on Reserves and the Fed’s Balance Sheet,” a difficult, but important and timely subject as the Fed begins what it calls its normalization process, or its transition to normal monetary policy, in its Policy Normalization Principles and Plans. I was a witness (here is written testimony) and because reserves are a very large part of Fed’s balance sheet, I started with a “before and after” look at Fed’s balance sheet focusing on the major items in 2006 and 2016: 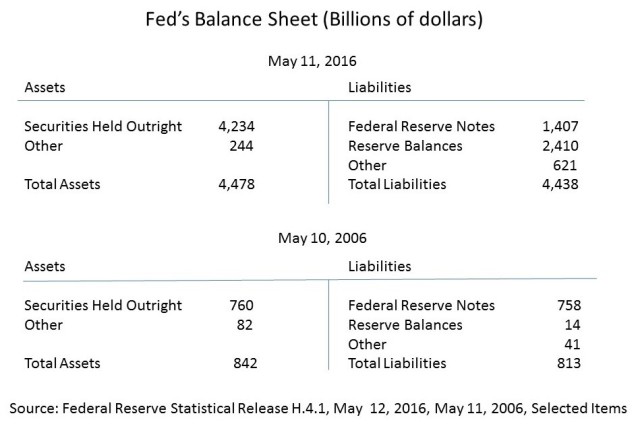 A quick glance shows that:

The chart shows the details of the jump in reserves at the times of QE1, QE2, and QE3. Clearly the large amount of reserves is a legacy of quantitative easing. 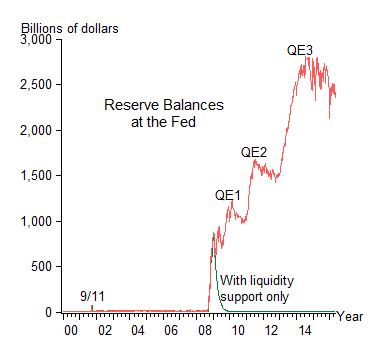 Thus with the current bloated balance sheet, the interest rate is not market determined by supply & demand. Rather it is administered by the Fed. This disconnect between the interest rate and reserves is unavoidable with balance sheet so large, but as a normal policy, the disconnect is a mistake. It enables the Fed to be a multi-purpose discretionary institution—allowing its balance sheet to remain large and available for many purposes, including credit allocation—rather than a limited-purpose rules-based institution. This detracts from good monetary policy.  If Congress wants these other things, such as credit allocation, it should assign another agency.

Given these problems, it is promising that the Fed says in its “Policy Normalization Principles and Plans” that it “will, in the longer run, hold no more securities than necessary to implement monetary policy efficiently and effectively, and that it will hold primarily Treasury securities….”  But more specificity about the meaning of “efficiently”, “effectively” and “primarily” is clearly warranted. In my view, a statement that in the longer run the Fed will pay interest only on required reserves and that the federal funds rate will be determined by the supply and demand for reserves would help clarify the nature of monetary policy in the normal state following the normalization period.

In sum, my testimony showed that the high level of reserves is a legacy of QE, that with the supply of reserves now much greater than demand, the Fed has no alternative to paying interest on reserves as it normalizes policy, and that in the years ahead the balance sheet should be bought down in size to be consistent with a market determined interest rate rather than administratively determined by the Fed. The normalization period, during which monetary policy returns to a normal state, should be as short as possible. In my view, normalization should be shorter than currently implied by the Fed’s “Policy Normalization Principles and Plans.”