Seeking a Way through the Fog of a Currency War

Many have speculated on the nature of, and the reasons for, the exchange rate regime change in China last week. While the central bank has issued press statements and answered questions about it intentions, it is useful to look at the data.

First note how this change in regime compares with the regime change ten years ago when China went off the peg with the dollar. The chart below plots the percentage change in the Chinese Yuan per dollar in the two periods.  Note that both regime shifts started out exactly the same way—with a 2 percent change—appreciation in 2005 and deprecation in 2015.   But then you begin to see a real difference. 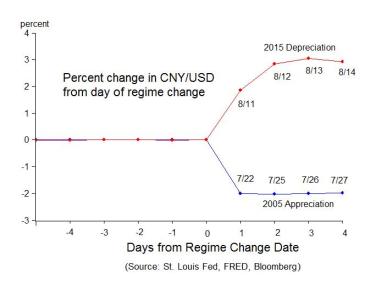 In 2005 there was virtually no change in the exchange rate as China began a very slow appreciation over a period of months and years with a temporary halt during the financial crisis.  This time, however, they let the rate move again on day 2 and on day 3, and they even let it appreciate a bit on day 4.  Of course the rate is still being managed—and we will learn more in upcoming days—but it is clearly more flexible and will be more flexible than in the years following the move in the summer of 2005.

I recall the first G7 meeting that the Chinese central bank governor attended.  Zhou Xiaochuan was the governor then and, of course, he is still governor now. Regarding the end of the dollar peg in 2005, Governor Zhou was asked at that G7 meeting about when China would start letting its exchange rate move. He answered “That is a difficult question…We don’t have a timetable. There is an old Chinese story about crossing a stream by walking from stone to stone. You can’t set a timeline because you don’t know which stones will be secure enough to step on.  But please believe me when I say that China is going to do this.” That answer pertains today even though he is taking bigger steps.

Why is China taking these new steps? Perhaps the IMF’s recent SDR analysis saying that the yuan needs to be more flexible and market sensitive is a factor, or perhaps it is the slowing Chinese economy. However, the most significant factor, in my view, relates to the recent large exchange rate movements around the world which appear to be largely due to unconventional monetary policy shifts in the United States, Japan and Europe, and the accompanying depreciations that have followed in many emerging market countries.

This developing story probably begins with the impact of quantitative easing in the United States on exchange rates, especially the Japanese yen. Following the financial crisis and into recovery, the yen significantly appreciated against the dollar as the Fed repeatedly extended its zero interest rate policy and its large scale asset purchases. Concerned about the adverse economic effects of the currency appreciation, the Abe government urged the Bank of Japan to implement its own massive quantitative easing, and, with a new governor at the Bank of Japan, this is exactly what happened.  As a result of this change in policy the yen fully reversed its course and has depreciated to levels before the panic of 2008.  In this way the policy of one central bank appeares to have affected the policy of another central bank.

The moves of the ECB toward quantitative easing in the past year have similar motivations. An appreciating euro was in the view of the ECB a cause of the weak economy.  The response was to shift to lower rates in the Eurozone and the initiation of quantitative easing. Indeed, the shift and initiation was followed by a dollar strengthening and a weaker euro. The taper tantrum and the reversal of capital flows led to dollar strengthening against the emerging market countries.  With all these uncertain developments in the background—call them the fog of a currency war—the recent actions of the central bank of China to let the yuan move with other currencies and away from the dollar are understandable.

This entry was posted in International Economics. Bookmark the permalink.