What Line Will the House-Senate Budget Conference Draw?

The new House-Senate Budget Conference chaired by Paul Ryan and Patty Murray is supposed to reconcile the House and Senate budget resolutions passed earlier this year make a set of new recommendations.  The House and Senate will then vote on the conference agreement. While the conference should be an opportunity for Americans to engage in a more informed and open debate about policy, there is still much confusion, at least judging from the questions and emails I have been receiving.

A starting point is to lay out in simple big picture terms what the House and Senate budget resolutions passed earlier this year look like. The chart below tries to do this. It was put together from those resolutions passed last March. It provides the year-by-year totals (not ten years sums) needed to compare the two budgets.  This kind of chart is more useful for comparing budgets than the ten-year multi-trillion dollar totals which few people can understand. 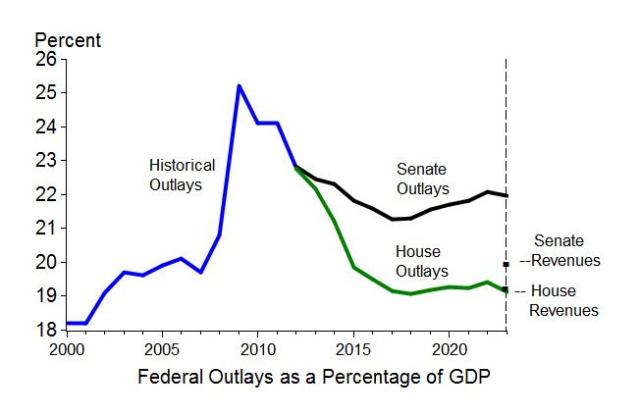 But the budget agreement will have to be a compromise of some kind and the question is where between the House and Senate lines will the conference draw the compromise line on the chart?

This entry was posted in Budget & Debt. Bookmark the permalink.