The view that the current U.S. recovery is unusually weak compared to past U.S. recoveries from recessions with financial crises is gaining more and more support.

Economists David Papell and Ruxandra Prodan in an article posted on Jim Hamilton and Menzie Chen’s blog Econbrowser examine an alternative measure of growth during recoveries following recession troughs, and they too come to the conclusion “that the current recovery for the U.S. has been slower than the typical recovery from severe recessions associated with financial crises.” Michael Bordo’s rejoinder to Carmen Reinhart and Ken Rogoff shows that his finding with Joe Haubrich that this recovery is relatively weak is robust to the Reinhart-Rogoff criticism about how one defines financial crises. Clive Crook rightly points out along with Bordo that when you define recovery  as starting from the trough (the standard way), this U.S. recovery is relatively weak compared to recoveries from past deep recessions with financial crises. 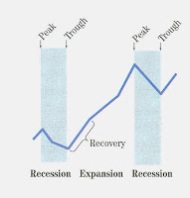 For the record, recovery is defined in this standard way in my Principles of Economics text as “the early part of an economic expansion, immediately after the trough of a recession” with the following schematic illustration, which has appeared in every edition from the first in 1995 to the current seventh.

Martin Wolf in the Financial Times weighed in on the other side of this debate yesterday. First, he takes issue with my comparison chart (included in his article) saying that I should not have included the recoveries in the “mid-1970s, early 1980s and early 1990s” because “the precursors and results of the recent crisis were quite different.” But if you exclude those three periods from the average my finding is even stronger as the top line in the chart below makes clear. 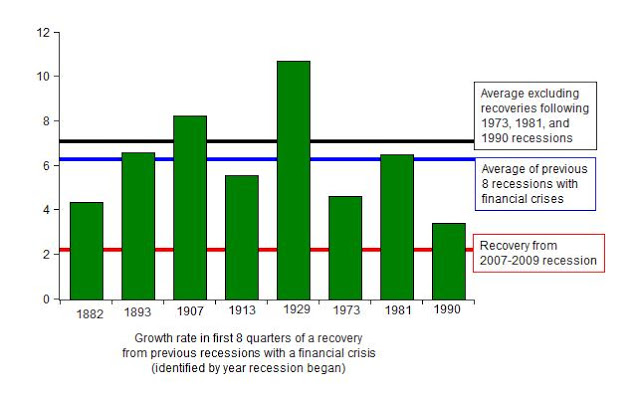 Second, he questions my definition of recovery, but as Bordo points out that definition has been used productively by monetary historians for decades. Third, Wolf argues that other countries experiences are important too, but Bordo, who has written over 250 papers on economic history, and other historians question lumping countries together in this way. In any case, all I have said is that this recovery is weak compared to previous US recoveries following financial crises, so as a logical matter brining in other countries does not show I am wrong about what I wrote, as Wolf claims. Finally, Wolf argues toward the end of his article that the fact that the recent recession was not as severe as the Great Depression and earlier recessions following financial crises means recent policy was successful. But the argument that the recession “could have been worse” has been made before and disputed here and here for example. In fact, I have argued that government policy prior to 2009 was largely responsible for the crisis and the deep recession.

In his column Clive Crook also makes a good point that we should be spending more time debating which economic plan is best for economic growth and job growth going forward. I completely agree, and here it should be noted that more than 650 economists have chosen to support the Romney economic plan rather than the Obama economic plan because of its positive effects on growth and job creation.