Posted on August 27, 2012 by John Taylor
The discussion of “Simple Rules for Monetary Policy” at last week’s FOMC meeting is a promising sign of a desire by some to return to a more rules-based policy. As described in the FOMC minutes, the discussion was about many of the questions raised in recent public speeches by FOMC members Janet Yellen and Bill Dudley. A big question is which simple rule?

The two rules differ substantially, however, in their interest rate recommendations as this amazing chart constructed last April by Bob DiClementi of Citigroup illustrates. The chart shows two rules along with historical and projected values of the federal funds rate. The rule labeled “Taylor” by DiClementi is the rule I proposed. The other rule is labeled “Yellen” by DiClementi because it corresponds to the rule apparently favored by Yellen. The projected values are the views of FOMC members. 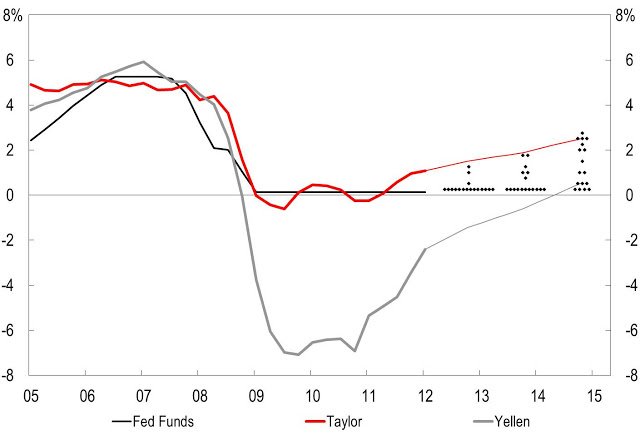 Observe that the first rule never gets much below zero, while the second rule drops way below zero during the recent recession and delayed recovery. The difference continues though it gets smaller into the future. Note that the projected interest rates by FOMC members span the two rules.

In my view, a smaller value of the GDP gap and a smaller coefficient are more appropriate. This view is based on a survey of estimated gaps by the San Francisco Fed and simulations of models over the years. But given the striking differences in DiClememti’s chart, more research on the issue by people in and out of the Fed would certainly be very useful.