Debate and Evidence on the Weak Recovery

Posted on May 2, 2012 by John Taylor
Last week’s GDP release is yet more evidence that this recovery has been remarkably weak, and has been so from the start—averaging only 2.4 percent in the 11 quarters since the recovery began. See my updated charts below with a comparison with the 1983-85 recovery. Debate about the causes of the weak recovery continues, however, with some still blaming the severity of the downturn and the financial crisis and others blaming economic policy. Indeed this was a big part of the recent debate at Stanford between me and Larry Summers which is now available on video.

Economic historian Mike Bordo, who is visiting at Hoover and Stanford this year sheds new light on the subject in a recent working paper with Joseph Haubrich of the Federal Reserve Bank of Cleveland. In a study of U.S. business cycles they find that deep recessions have always been followed by strong rather than weak recoveries and that this is also the case when there are severe financial crises. So history is not on the side of those who blame the preceeding deep recession and financial crisis. Other factors have likely been at work. 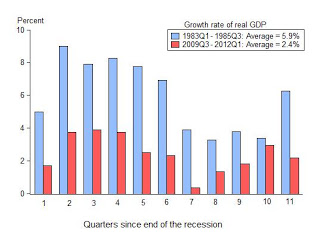 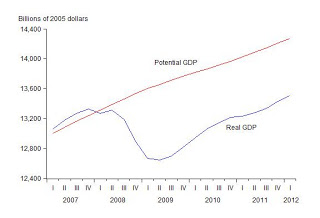 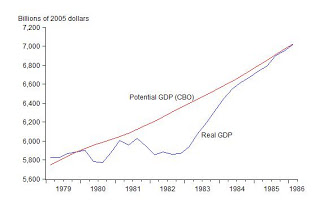