Straightjackets and “We Rule” Shirts

David Wessel writes about the “straitjacket” of a one-size-fits-all monetary policy in his Wall Street Journal column this week. He shows why a single interest rate set by the European Central Bank is not necessarily appropriate for all the countries in the Euro zone: it can push some countries off the Taylor rule which can lead to financial excesses and other problems. In the period leading up to the financial crisis, the Euro interest rate was way too low for Ireland, Greece, and Spain. So it’s not surprising they ran into financial difficulties. Germany in contrast was right on the rule. The chart below (a favorite of mine produced in March 2008 by the OECD) illustrates the same point: the larger was the deviation from the Taylor rule, the larger was the housing boom. The chart also illustrates that the single rate would not have been such a problem if it were closer to the Taylor rule during that period: all the other countries were to the right of Germany.

Additional evidence that you win with rules and lose with discretion was provided this week in a video produced by Stanford economics graduate students for the annual skit party. Simply wearing “we rule” shirts transforms losers into winners in the annual little big game with Berkeley. 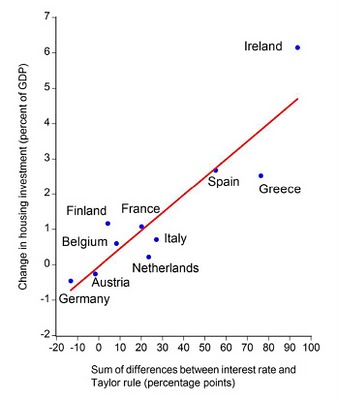