If history is any guide, we are about to hear scores of scare stories about the harm caused by the spending reductions in the 2011 budget resolution (H.R.1) passed by the House early this morning. Maybe you’ve already heard how the budget threatens the “daily operations of National Weather Service.” In assessing these claims, it is very important to recognize and to emphasize that in 2009-10 we had an unprecedented binge of federal spending. The simplest way to understand the proposed budget is that it largely (not completely) undoes this two-year binge and brings spending back to about what agencies had to spend in 2008. If the government budget was enough for federal agencies—such as the Weather Service—to operate in 2008, then how can one claim that they cannot operate with roughly the same budget now?

The two charts help illustrate this. They focus on the non-defense non-security discretionary part of the budget, which has been the focus of the 2011 budget debate so far. Of course the other parts of the budget must be addressed starting with the 2012 budget, but if we cannot have a fact-based principles-based discussion of the 2011 budget, it will be virtually impossible to resolve the longer term issues.

The first chart compares the 2011 House budget appropriations (passed the House this morning) with appropriated spending in the 2008 budget enacted in December 2007. Note how the proposed 2011 levels are close to but slightly higher than the enacted 2008 levels. In fact they are about 5 percent higher which is more than enough to keep up with inflation during this period. The chart also illustrates the recent spending binge with the 2011 levels proposed in the Administration’s fiscal year 2011 budget. Clearly the House budget proposal represents cuts from the binge but not relative to right before the binge.

The second chart divides the appropriated spending into nine budget categories (other than defense, homeland security, and military construction). The chart shows how close the 2011 proposal is to 2008 for each category, with some higher and others lower. Of course there will be understandable disagreement between Republicans and Democrats about the composition of spending between and within these budget categories, and this will be a reasonable subject for debate with the Senate and the President. But I think these data show that a reasonable compromise would be to keep the overall totals as in the House proposal and thus take a first important step toward restoring fiscal sanity. 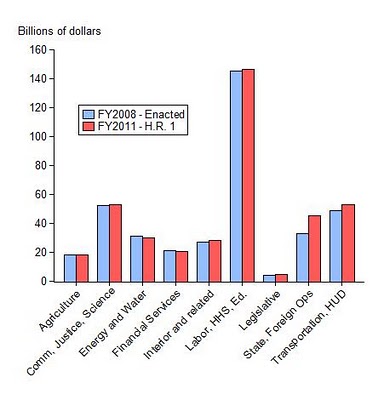