Every Friday the economists at JP Morgan issue a useful compendium of facts and analysis called Global Data Watch. I’ve been reading GDW for many years, and I recall the days when it was only available in the paper edition.

Last Friday the economists moved a bit outside their data lane into undergraduate teaching with a major criticism that economics textbooks failed to teach students about the increase in excess reserves in the past two years. Their piece is called Blame the Textbook, Not the TA, for the Money Multiplier Confusion. Of course textbooks are not updated every week like GDW so it takes a while for them to reflect the latest developments. Nevertheless, the latest edition of my Principles of Economics text with Akila Weerapana, which has already been out for a year and a half now, does cover this increase in reserves and related developments. On page 635 of the 6th Edition, the Global Financial Crisis Edition, there is an explanation for the massive increase in excess reserves in a section called “The Explosion of Reserves and the Reserve Ratio in 2008.” I agree that it is important to teach students these developments in monetary economics and policy, so I reprint that section below. By the way there is an explanation of quantitative easing on page 750 of the same text.

From Principles of Economics, p. 635

“Banks sometime hold more than the required amount of reserves at the Fed and the reserve ratio can rise above the required reserve ratio. In our examples so far we have assumed that the reserve ratio is constant. In this section we explain what can happen when the reserve ratio changes. We focus on a particularly interesting real world example.
“In the fall of 2008 reserves at the Fed started increasing at a very rapid rate. As in our examples in the previous section, the Fed increased reserves by purchasing bonds and paying for them by creating deposits. However, in this case the Fed purchased very large amounts of bonds and other securities issued by private firms rather than the Federal government as it usually does. And it also made loans to private financial firms in an effort to contain the financial crisis. The Fed reasoned that by buying the bonds it could drive the interest rate on those bonds down which would ease the financial crisis. It also reasoned that making loans to certain financial firms would help them avoid bankruptcy and reduce risks to the financial system.
“When the Fed purchased these bonds and made the loans it paid for them by creating reserves—crediting banks with deposits at the Fed. The increase in reserves was unprecedented. Figure 4 shows how large, sudden, and unusual the increase was. After remaining relatively steady, reserves exploded in the fall of 2008. They increased from $44 billion in August 2008 to $858 billion in January 2009, more than a 20 fold increase.
Demand deposits at banks also increased as a result of this increase in reserves, which is not surprising given the connection between deposits and reserves explained in the previous section. The increase in demand deposits at banks is also shown in Figure 4. 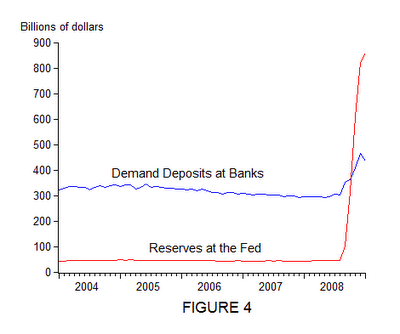 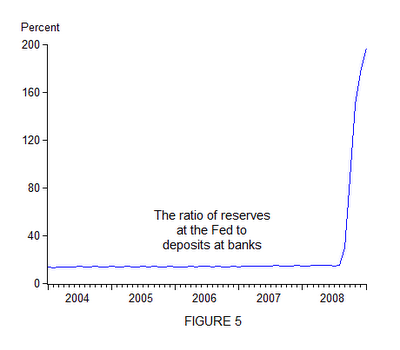