Make Failure Feasible and End “Too Big To Fail”

Today the Senate held a hearing on a bankruptcy reform proposal which would address the problem of too-big-to-fail head on. The reform applies to large financial firms and makes failure feasible under clear rules without systemic spillovers thereby greatly reducing the likelihood of government bailouts.  Much work has been devoted to this proposal, including at the Resolution Project directed by Ken Scott at Stanford’s Hoover Institution, where a third book on the topic is coming out with this suggestive cover (two of the co-editors, Tom Jackson and I, testified at the hearing: Tom’s testimony and my testimony). 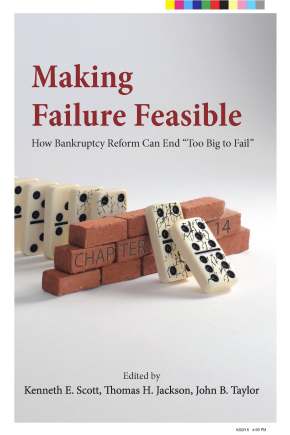 And it is very encouraging that there are now two good reform bills, “The Taxpayer Protection and Responsible Resolution Act” in the Senate and “The Financial Institution Bankruptcy Act in the House,” which incorporate the idea.

While traditional bankruptcy has many benefits, including its basic reliance on the rule of law, it has shortcomings, perhaps the most important being that it is difficult both to resolve a failing institution and stop a run on it. To deal with the shortcoming, a new chapter is needed—it’s called Chapter 14 because there is no such chapter in the bankruptcy code now. Chapter 14 could be implemented over a weekend, and it would leave operating subsidiaries outside of bankruptcy entirely. It would do this by moving the original financial firm’s operations to a new bridge company that is not in bankruptcy.  This bridge company would be recapitalized by leaving behind long-term unsecured debt (capital structure debt).

The aim is to let a failing financial firm go through bankruptcy in a predictable, rules-based manner without spillovers while people continue to use its financial services, just as people flew on American Airlines planes, bought Kmart sundries and tried on Hartmax suits when those firms were in bankruptcy. To understand how a reformed bankruptcy code would resolve a large financial institution, Emily Kapur of Stanford has examined how it would have worked in the case of Lehman in the book Making Failure Feasible. Her summary of the analysis is attached to my testimony.

In my view Chapter 14 would work much better than Title II of Dodd-Frank where the FDIC would have to exercise considerable discretion, and the resulting uncertainty might lead nervous policy makers to resort to massive bailouts.

In sum, reform of the bankruptcy law is essential for ending government bailouts. If accompanied by an increase in capital and capital structure debt, such a reform would go a long way toward ending too-big-too-fail.