Across the Great Divide: New Perspectives on the Financial Crisis

A year ago today, the Hoover Institution and the Brookings Institution held an unusual joint conference on the financial crisis, where twenty-four economists and legal scholars reexamined the crisis, its effect on the US economy, and possible policy reforms. The participants were spread between two venues: Hoover at Stanford and Brookings in Washington.  The conference was simulcast so that people at each location could see and hear people at the other location.

This month a book titled Across the Great Divide, containing all the conference papers and edited by Martin Baily and me will be released. 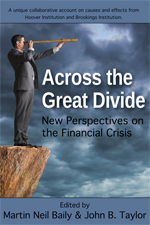 We chose that title because it is symbolic of the wide range of different opinions represented at the conference.  As we wrote in the introduction, “while both Brookings and Hoover are proud of the range of scholars within each institution that embrace different politics and economic philosophies, Brookings is often seen as center left while Hoover is center right, so it was an important step to undertake this joint conference as a way of expanding the dialog…”

Indeed there were differences of opinion. The conference included the first presentation by Larry Summers of his secular stagnation idea which has since become a widely cited reference as a possible explanation for the slow growing economy of recent years. But it also included alternative views, such as mine, that the slow growth has been due to poor economic policy and can be ended with a change in policy.  The conference included both those critical of the Fed and those who praised the Fed in recent years.

Despite these differences, there was, as George Shultz emphasized in his concluding remarks, “more agreement here than people may have expected,” suggesting therefore that perhaps the conference helped to narrow “Great Divide.”  He noted, for example,  that people at the conference “all instinctively do realize” that bailouts change people’s behavior in an undesirable way and that we need to look for ways that encourage people in leadership positions to resist bailouts. As he put it: “for all of the fascinating and important issues…in this conference to work, there have to be some people at the top with guts who are willing to look at these things and see them through. It isn’t easy.”

Here is the table of contents for the book:

Chapter 1 How Efforts to Avoid Past Mistakes Created New Ones: Some Lessons from the Causes and Consequences of the Recent Financial Crisis Sheila C. Bair and Ricardo R. Delfin

Chapter 3 Causes of the Financial Crisis and the Slow Recovery: A Ten-Year Perspective John B. Taylor

Chapter 5 The Federal Reserve Policy, Before, During, and After the Fall Alan S. Blinder

Chapter 6 The Federal Reserve’s Role: Actions Before, During, and After the 2008 Panic in the Historical Context of the Great Contraction Michael D. Bordo

Chapter 7 Mistakes Made and Lesson (Being) Learned: Implications for the Fed’s Mandate Peter R. Fisher

Chapter 9 How Is the System Safer? What More Is Needed? Martin Neil Baily and Douglas J. Elliott

Chapter 13 Framing the TBTF Problem: The Path to a Solution Randall D. Guynn

Chapter 15 Single Point of Entry and the Bankruptcy Alternative David A. Skeel Jr.

Summary of the Commentary Simon Hilpert