A Victory for Markets and a California Raisin Suit

Enlivening the principles of economics course (we call it Economics 1 at Stanford) with skits and stunts to make it more understandable, relevant and memorable is a passion for many teachers. Reporter Kathy O’Toole once wrote about one of my stunts in an article in Stanford Today describing how I would dress up in a California raisin suit:

a few years from now, what these students will remember is the morning their stately professor morphed into a brown, wrinkled California raisin with six white stubs for fingers.  ‘I woke up this way this morning,’ he mumbles to the class, his misshapen hands fumbling to straighten his supply-demand curves on the overhead projector. ‘But the lecture must go on.’ And on it goes at its usual pace until Kresge [Auditorium] suddenly is jolted by a blast of bass guitar. The pudgy raisin on the stage, graph pointer still in hand, begins to wiggle, bend and shuffle to Marvin Gaye’s voice blaring “Heard It Through the Grapevine.” The lyrics miraculously replace the supply-demand curves on the overhead. By the time the raisin stumbles breathless, rumpled and sweaty through the last chorus, Kresge is rocking.,.

My purpose in all this craziness?  Simply to illustrate the workings of a famous government intervention—in this case agricultural price supports and the California raisin ad they led to.  One time a New York Times article endeavored to link this stunt to my position on bailouts as Treasury Under Secretary.

I always hoped that the price supports would be removed even if that would make my stunt obsolete. So my ears perked up when I heard my friend Ed Feulner tell a story at lunch yesterday about how free markets might be breaking through raisin controls in California. A few producers refused to cooperate, were fined and took the case to court. And thanks to the Supreme Court and Justice Kagan in particular, they might win.   The uplifting story is told in the Washington Times. And here is one of those ads. 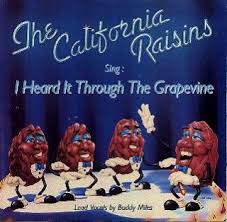