The plan to use Moammar Gadhafi’s frozen assets to fund the Libyan rebels faces legal obstacles according to this weekend’s Wall Street Journal story “Obstacles Loom on Path To Funding Libyans.” This reminds me of the plan to use Saddam Hussein’s frozen assets to fund payments to the Iraqi people in 2003. The plan was developed before the military invasion and was part of an overall plan for financial stability. I was Under Secretary of Treasury with responsibility for the plan. Legal obstacles arose then too, and we had to develop legal procedures to deal with them.

Treasury lawyers determined early on that the President of the United States could legally issue an executive order calling on U.S. banks to vest Hussein’s frozen funds with the Treasury, which would then transfer them to the Iraqis. But an obstacle was the risk of law suits from Saddam’s victims, who could make claims on the funds, prevent their transfer, and thus threaten the financial stability plan. To deal with this risk, we recommended that the executive order contain an exception for such victims—but only if they had already made claims—and that the order state that using the frozen funds for the Iraqi people was in the interest of the United States.

So when the military operation began, President Bush issued Executive Order 13290, “Confiscating and Vesting Certain Iraqi Property,” saying that “All blocked funds held in the United States in accounts in the name of the Government of Iraq, the Central Bank of Iraq, Rafidain Bank, Rasheed Bank, or the State Organization for Marketing Oil are hereby confiscated and vested in the Department of the Treasury, except for the following….” The exception was for funds already claimed in a legal suit. The executive order also stated that “I [George W. Bush, the President of the United States of America] intend that such vested property should be used to assist the Iraqi people and to assist in the reconstruction of Iraq, and determine that such use would be in the interest of and for the benefit of the United States.”
Once the order was issued we opened an account at the New York Fed where Bank of America, JP Morgan Chase, and other banks transferred about $2 billion of Saddam’s previously frozen funds. The Treasury then withdrew the funds as needed. Cash was removed from the Fed’s warehouse in New Jersey, placed on armored trucks, shipped to Andrews Air Force Base, loaded on planes, flown to Iraq, and paid to Iraqis. I recall how Treasury staff went down to Andrews to inspect the first cash transfers. When they returned to report that the cash was airborne, they radiated well-deserved pride at their accomplishment. The picture shows David Nummy (blue shirt) of Treasury dispersing the cash (in the black box) to the Iraqis in Baghdad. 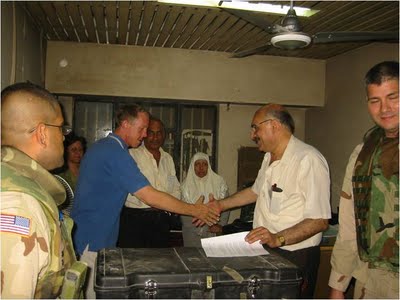 There are differences today—Saddam Hussein’s funds were frozen years before during the first Gulf war, but the legal procedures remain relevant. To overcome such obstacles, President Obama would have to say something like “I determine that using the funds to assist the Libyan rebels is in the interest of the United States.”