How much of the rebound was due to the “stimulus package” passed in February of last year? I have shown in a previous post that the increased transfer payments to individuals and temporary tax rebates had virtually no impact in jump-starting consumption. But what about the increase in government purchases in the stimulus package? A look at the details in the GDP report of Friday shows that changes in government purchases have had virtually no effect. The turn-around in growth has been mainly due to private investment. Four simple graphs illustrate this.

Recall that GDP is the sum of Consumption plus Investment plus Net Exports plus Government Purchases. Thus the growth of GDP can be decomposed into contributions due to each of these four components. Table 2 of the BEA data release reports these contributions, and I summarize them in the four charts. In each chart the blue line shows the growth rate of real GDP from the start of the recession. You can clearly see the decline in growth in the recession and then the start of the rebound. In the first chart the red line shows the contribution from investment. It explains most of the recession and the rebound. 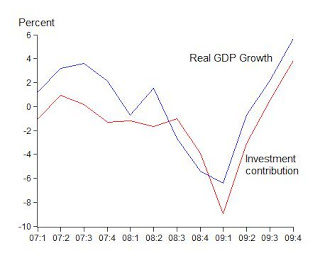 In the next chart you see the contribution of consumption, which plays a noticeable but considerably smaller role. 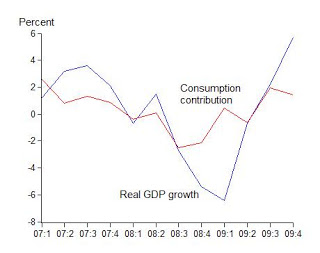 The third chart shows the contribution of net exports, which explains some of the smaller movements in early 2008. 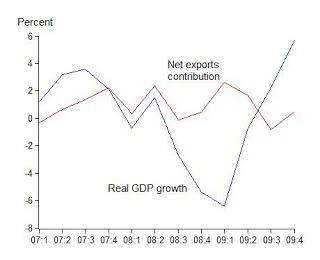 The fourth chart shows the contribution of government purchases. I have focused on non-defense federal plus state and local purchases because defense spending was not part of the stimulus (adding in defense does not change the story). Note that none of the action in real GDP growth is due to government purchases. 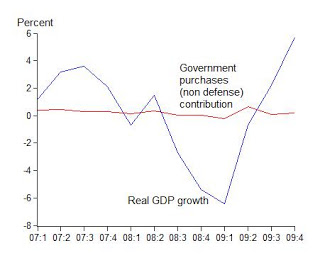 In other words during the entire first year of the stimulus package, the contribution of government purchases to change in real GDP growth is virtually nil. There is no evidence here that the stimulus has worked either to raise GDP growth or to create jobs.