Last week I was on a panel with Stanford President John Hennessy and Congressman Paul Ryan at the new Hoover Institution Offices in Washington. Al Hunt moderated the discussion which focused on policies to raise economic growth. The video is here.

The discussion revealed both a sense of urgency and of optimism.  I am convinced that we sorely need a major change in US economic policy to address the problem of low economic growth, only 2 percent since the end of the recession 5 years ago compared to years of 4 or 5 percent growth following earlier deep recessions in the US. That’s huge. It means that we have far fewer resources available for both private and public use.

I argued, as I have been arguing for a long time, that the cause of weak growth is poor economic policy. But Al Hunt asked me if it was all over for a strong growth in America. After all, more and more people are talking of secular stagnation and telling stories that we have picked all the low hanging fruit. I just don’t see that, maybe because I come from Silicon Valley where you see invention and innovation all over the place. But neither does John Hennessy, who knows as much as anyone about information and technology (also from Silicon Valley), or Paul Ryan, who knows as much as anyone about policy. You get a sense of the optimism from watching them on the video.

The cover of The Economist last week portrayed the US economy as a turtle crawling along as its rider tragically tries to get it to move faster, but it is clearly incapable. This may be the way that the secular stagnationists or high-hanging fruiters see it. 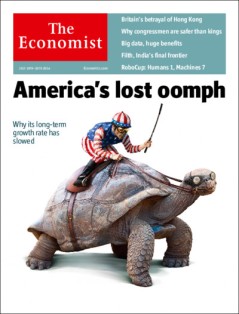 To me a much better picture for the US economy is a a sleeping giant ready to be awakened or better yet, a caged eagle. If you removed the cage of poor policy. then the economy would soar again.

This entry was posted in Slow Recovery, Teaching Economics. Bookmark the permalink.