Economics One for Preschoolers

Meghan Cox Gurdon has a nice review article in the Wall Street Journal celebrating Richard Scarry’s books for children. This is the 50th anniversary of “Richard Scarry’s Best Word Book Ever.”  I’ve been reading some of Scarry’s books to my grandson recently.  One thing Meghan skips over, which I really like (and I bet many Journal readers would too), is how Scarry brings basic economics—money, exchange, gains from trade, production, investment, saving, productivity, circular flow–into his stories in a way even preschoolers can understand.

Here is an example from the Scarry book “What Do People Do All Day?”  It shows Farmer Alfalfa selling some of his crops to the Grocer Cat for money, shown as nice big shiny  coins. (In another part of the book Grocer Cat sells the vegetables to other workers in town.)

Then on the next page (shown below) Alfalfa uses some of the money to buy a new suit from Stitches the tailor. He also buys a new tractor (investment) from Blacksmith Fox, so he can grow more food than he could before (yes, increase labor productivity!). Then he buys some presents for his family (consumption).  He puts the rest of the money into the Busytown bank. 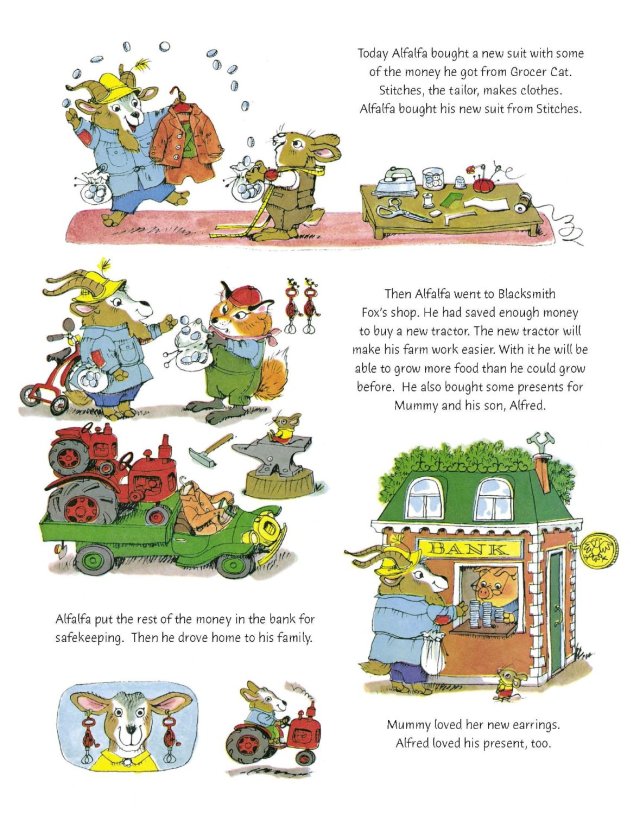 These pictures are from the 1968 edition.  They do not have the part about the bank making too many risky loans and then being bailed out by the government as in the fall of 2008.  Of course, you can explain this to the kids by saying that Busytown bank is not a too-big-to-fail bank, like the banks in the big city.  So piggy, who owns and runs the bank, is not expecting a bailout and thus is not so foolish to make so many risky loans.

There are not many children’s books with economics so explicit. Another is “Caps for Sale: A Tale of a Peddler,  Some Monkeys and Their Monkey Business,” which I once gave a graduation speech about.