Why Did Macro Policy in Emerging Market Countries Improve?

The resilience of emerging market economies severely hit by the panic of 2008 is amazing, especially in comparison with the long emerging market crisis period of a decade ago. 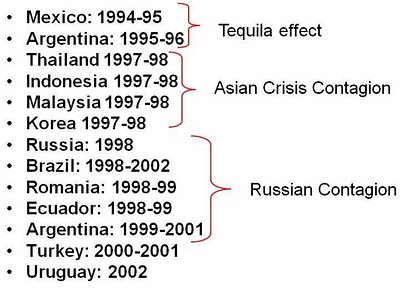 I have written that the main explanation for this resilience is improved macroeconomic policy which was put in place in the years before the crisis in many of these countries: higher foreign reserves, lower inflation, reduced borrowing in foreign currencies, and a better fiscal position. But what was the underlying reason for these improvements? Certainly policy makers in the countries deserve credit, but changes in international economic “rules of the game” provided the necessary political and economic incentives.

Recall that the Mexican crisis of 1994-95 lead to large bailouts of the holders of Mexican dollar-linked government bonds by the IMF and the U.S. Treasury. At the time, many expressed concern about the moral hazard and the policy unpredictability caused by these bailouts. Expectations of such bailouts would increase risk taking on the part of investors and reduce incentives for emerging market countries to take steps to avoid circumstances that might lead to crisis. Some worried that the bailout philosophy could lead to more severe crises in the future, and they made proposals to establish a new international framework for limiting bailouts. The British and Canadian governments proposed putting limits on access to large scale loans from the IMF, but the United States resisted their proposals, so no agreement could be reached.

Without such a framework interventions were erratic. Emerging market crises got worse and continued for another eight years. There was the Asian financial crisis and the Asian contagion with Korea, Thailand, Indonesia, and Malaysia. There was the Russian crisis with global contagion to Brazil and Argentina and even the United States as the Fed cut the interest rates in response. The erratic nature of the interventions was very visible in the case of Russia. After several years of support, loans were suddenly pulled in August 1998.

But eventually a solution to the impasse was found in the creation of an alternative to IMF bailouts. The alternative was to add new clauses to the sovereign bonds—collective action clauses—which allowed for orderly workouts of sovereign debt problems between a country and its creditors. The alternative made it credible for the IMF to impose limits and abide by them.

People were skeptical that such clauses could be put into the bonds, but Mexico proved the naysayers wrong and went ahead and issued such bonds on February 26, 2003 (seven years ago last Friday) and many others countries followed Mexico. Agustin Carstens, now Finance Minister of Mexico, played a key role in the effort. As soon as these clauses were put into the bonds, the IMF and its shareholders agreed to establish a new “exceptional access framework.” Soon after the emerging markets moved into a new era of stability. Crises generated by emerging market countries diminished sharply. The countries became more resilient to shocks from abroad, as we saw in the recent crisis. It is hard to prove cause and effect in economics, but in my view these limits played a role by making large scale bailouts less likely and thereby providing incentives to emerging market countries to follow policies which would reduce the chance of crisis.