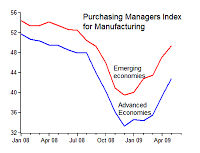 As the G20 Leaders travel to Pittsburgh this weekend they should reconsider their April 2 decision “to treble the resources available to the International Monetary Fund (IMF) to $750 billion.” Why? First, the IMF does not need the money: as the first chart shows, it has loaned only a small fraction (7%) of the targeted $750 billion, even less than it loaned in severe emerging market crisis period of 1995-2003. (The IMF uses SDRs to measure loans: SDR= $1.6). Second, emerging market economies have recovered from the worst of the financial crisis. In fact, according to the purchasing managers index shown in the other chart, they bottomed out in December of last year, well before the April G20 decision to treble resources. Third, providing too many resources to any government institution can be harmful. Discipline is lost without a budget constraint. Even with the best intentions, resources are wasted or misused. Excess resources become a slush fund leading to mission creep, unpredictable policies, and more crises. For more details on the data in the charts see my essay in the useful book edited by Alexei Monsarrat and Kiron Skinner prepared for the G20 meeting.

This entry was posted in International Economics. Bookmark the permalink.